Females own fewer investment properties than males, but dominate the ‘units' sector

The annual CoreLogic Women and Property Report has just been released and as always there are some fascinating insights.

In particular, with the recent surge in property values, general wealth inequality between those that own property and those who don't has worsened – and given the findings of our report, that female property ownership (23.5%) is lower than male (24.2%), this means that females across NZ have been relatively disadvantaged by the boom (which admittedly has now come to a pretty rapid end).

NZ females also have lower property ownership rates than their Australian counterparts, and if you convert the percentage shares into raw numbers, the gap between males and females in NZ equates to around 7,600 dwellings.

A key difference between the latest and previous report is that we've split the data further, and below we discuss the new breakdowns – by owner type (owner occupier vs investor) and by property type (e.g. standalone dwellings vs ‘units', or in other words townhouses/flats/apartments).

Starting with gender ownership of the investment property stock, the discrepancy is even larger than the market as a whole. Across NZ, our report shows that women (single or joint ownership) held 23.6% of rental properties, while males owned 28.4%. In raw numbers, this gap equates to approximately 10,500 properties. 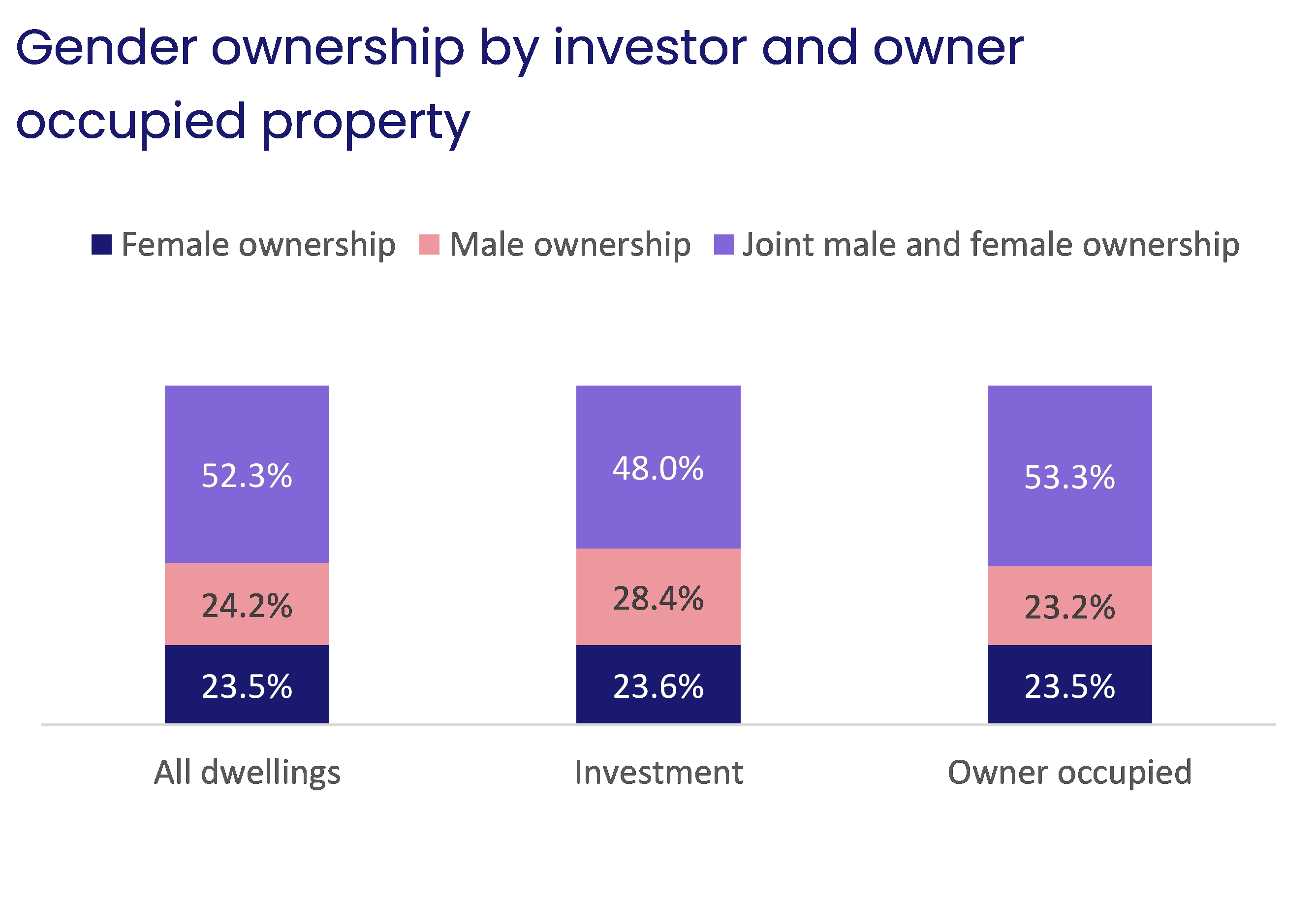 It's difficult to nail down the exact reasons why these ownership rates differ so much, but the gender income gap (with women on average earning less than men) surely has a role to play, while it's also possible that various studies through the years showing a more risk-averse – or alternatively a less risk-indifferent – attitude to investing amongst women could also be a factor.

At the same time, it's also worth noting that women in fact had a slightly higher rate than men for owner occupied properties – 23.5% compared to 23.2% (with the remaining 53.3% of owner occupied stock held by mixed genders).

It's also revealing to look at the data broken down by property type, either house or ‘units'. In Australia, ‘units' are a well understood property type, encompassing apartments, flats, townhouses etc. (basically anything that's not a standalone house). The phrase isn't as commonly accepted in NZ, but for the purposes of this article, we'll use it.

Unsurprisingly, given that smaller dwellings or units are typically cheaper than houses, the single gender ownership rates are higher – regardless of male or female. For males, the single gender house ownership rate is 23.1%, versus 27.7% for units. And the gap is even larger for females, 22.1% for houses, versus 32.9% for units. In fact, this shows that single-gender female ownership of units in NZ is comfortably higher (by about 5%-points) than the male equivalent. 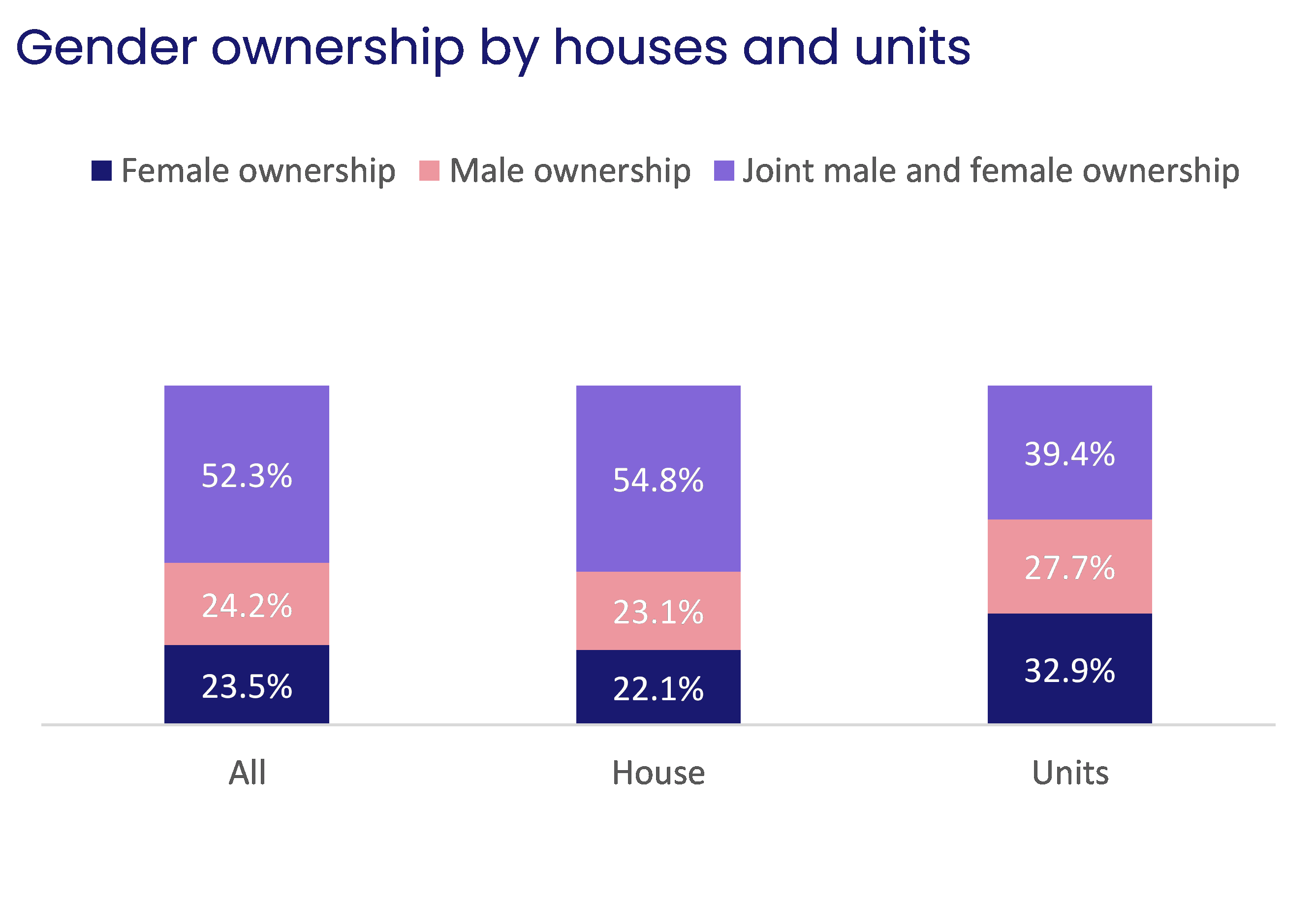 This emphasises that given lower incomes and hence greater affordability challenges, a female in NZ who strives to own a property is generally finding it more feasible to buy a unit rather than a house, and to an even greater extent than males (who admittedly also have this challenge). This is borne out even more clearly on some of the geographical data.

For example, in the ‘old' Auckland City market (i.e. the central area including the CBD), 45% of the female-owned properties that we identified were units. To be fair, given the composition of the housing stock in that market (i.e. larger number of apartments), the propensity to own a unit will always tend to be higher. But this also hints at the affordability challenge too – Auckland City is one of the most expensive markets in the country, so to own a home there, the job gets easier if units are looked at rather than standalone houses.

Overall, there are still considerable affordability challenges in the NZ housing market, which aren't about to disappear quickly, even if property values do fall gradually over the next 6-12 months. These issues are faced by both males and females, but our latest report highlights again that females have the larger hurdles to jump.