Has there been a clear effect on property values from Transmission Gully?

When it comes to major new infrastructure projects there is always a lot of discussion about the potential spillover benefits for property owners in the vicinity, as more locations become better connected to city centres and employment hubs. And the recently-completed Transmission Gully roading development has been no exception.

But can we clearly say that it has boosted property values in and around Kapiti Coast? And could there actually be negative effects too?

There are probably two key problems with trying to isolate any effects on property values from Transmission Gully. The first is the dates to use – is it best to look at when the public were first made aware of the potential project? Or when construction started? Or much closer to completion? And second, inevitably we’ll never know the counter-factual – i.e. can we really be sure that Transmission Gully has resulted in higher (or lower …) property values than if it had never existed?

For our purposes, we’re going to focus on two key dates – ‘late 2012’, when the scheme was announced as NZ’s first private-public roading project, and ‘late 2014’, when it actually started. What happened over those periods, and since then too?

Our first comparison is values across Kapiti Coast in general (now more commutable to and from Wellington City) versus Wairarapa, in this case South Wairarapa District specifically – where commuting time/ease has seen no change. Unfortunately, any effects here are far from clear. In fact, since late 2012, for example, South Wairarapa average property values have risen by a total of about 220%, with Kapiti Coast ‘only’ up by 170%.

The long-run patterns for the levels of values and the year-by- growth rates through time in both areas have been fairly similar too (albeit as noted they cumulate up to a larger overall increase in South Wairarapa). And as the first chart below shows, nor is there any clear evidence of bursts of growth in Kapiti Coast relative to South Wairarapa around any key Transmission Gully dates either. 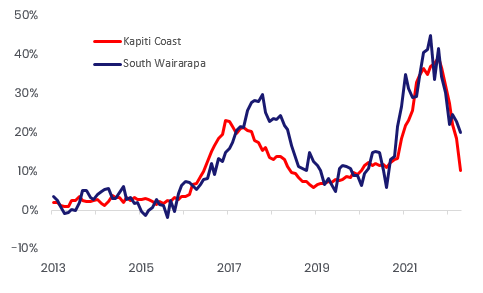 So let’s look at a different comparison. Now, we’ll switch to comparing median property values within parts of Kapiti Coast to other parts of the district – namely Paekakariki (now more commutable to Wellington), versus Plimmerton, which has been less impacted by Transmission Gully in terms of travel time saved, and in fact possibly adversely affected (by less through-traffic).

There may be some slightly more compelling evidence here. The second chart below which shows annual growth rates through time in each town does suggest a stronger burst of enthusiasm in Paekakariki over 2014-15, coinciding with construction starting on the project. It also had another period of outperformance over 2020-21, a time when the scheme was inching a bit closer towards completion. Overall, Paekakariki has seen median property values rise by around 140% since late 2014, versus Plimmerton’s rise of roughly 120% (although it’s also worth noting that if you strip out the post-COVID period, i.e. looking at December 2014 to March 2020, median values in Paekakariki grew by the same amount as Plimmerton, 54% apiece). 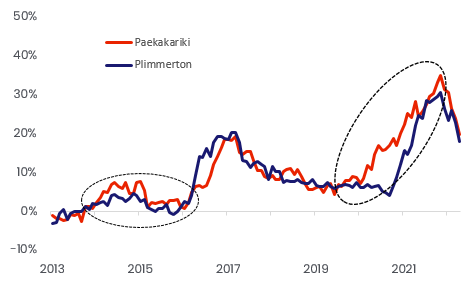 On the face of it, then, an area within Kapiti Coast that is now more accessible in terms of driving to and from Wellington City does seem to have had slightly stronger property value growth over the past decade or so than an area less obviously boosted by Transmission Gully. This is what common sense would tell you. Indeed, it seems almost certain that at an individual property level there will have been buyers in areas like Paekakariki who have offered more to buy a house than they otherwise would have done, simply because of the Transmission Gully effect.

Certainly, there is also plenty of evidence available elsewhere of the spillover effect on property values of better transport infrastructure. For example, in 2018 Auckland Council economists estimated that easy walking access to a commuter train station could give as much as a 15-20% price premium to those properties1. Even owning a property within walking distance of a high-speed bus route seems to provide a price premium, albeit smaller (<10%).

However, as noted above, it’s not all one-way traffic (excuse the bad pun). For example, was the phase of outperformance by Paekakariki relative to Plimmerton over 2020-21 really Transmission Gully, or other factors? We’ll never be 100% sure. But it’s certainly worth noting that 2020-21 was obviously the new COVID world, where remote working became more prevalent and the need/frequency to actually commute at all was lessened – that could easily have contributed to some people paying more for a property, rather than a Transmission Gully effect.

In addition, although Paekakariki may have seen some upwards house price pressure from being more accessible to Wellington, extra noise/cars could potentially have detracted from the price some buyers have been willing to pay. Similarly, Plimmerton may suffer a little economically because of reduced traffic flows (which would probably also undermine house prices), but some buyers may now be prepared to pay more for a peaceful property.

In the end, without a full-scale statistical study, it’s very hard to be sure of the scale of the impact (either positive or negative) of Transmission Gully on Kapiti Coast’s property values – although it’s common sense to think that some sellers will be pretty happy with the price they got from a buyer who was eyeing up the benefits of a faster commute.

Perhaps the most important point is that we now have the road, and any large infrastructure projects like Transmission Gully are surely progress.