Our latest Buyer Classification figures highlight what you might call a ‘debt vs equity' split in the market, with mortgaged investors and first home buyers seeing low/falling shares of property purchases, but cash investors and movers having a rising presence. To be fair, these changes in market share need to be viewed in the context of lower overall numbers of transactions. But with loan to value ratio rules still pretty tight and mortgage rates rising, buyers with a higher equity base may continue to be key players in a debt-constrained housing market this year.

Looking at the data itself, perhaps the most notable recent shift has been for first home buyers (FHBs), who only had a 23% share of purchases across Q1 as a whole, and 21% in March itself (see the first chart).Apart from the lockdown-affected April 2020, the latest figure is the lowest monthly share for FHBs since the second half of 2017. This abrupt shift only started in January (their share was still 26% in December), clearly a reflection of November's tightening to the LVR rules and December's CCCFA law changes.

Indeed, in regards to the LVR changes, Reserve Bank figures show that in October last year, about two in five FHBs took out a low deposit mortgage – but by February this year the figure was only one in five. In addition, it's a bit of a truism, but also consider the overall lending slowdown – without sufficient demand from higher deposit borrowers, the banks simply aren't able to advance much low deposit debt. That is, 10% (the LVR speed limit) of not much is still not much.

Meanwhile, across Q1 2022 as a whole, mortgaged investors (multiple property owners/MPOs) had a market share of around 23% – below the long term average of 25%, and a continuation of the relatively quiet period that they've had for the past 6-9 months in the aftermath of last year's interest deductibility changes and of course the requirement for a 40% deposit in most cases (apart from new-builds). For comparison, in Q1 last year, their share of property purchases had been much higher, at close to 30%.

At a more granular level, when you split the mortgaged MPO share by the size of the buyer's portfolio after their most recent purchase you can see that the drop compared to a year ago has been fairly broad-based, reflecting MPO 2 (those that own two properties, generally their own home and their first rental), MPO 3-4, and MPO 5-9 (see the second chart). In other words, it hasn't just been the ‘Mums and Dads' who have pulled back; it's also been the larger players too. 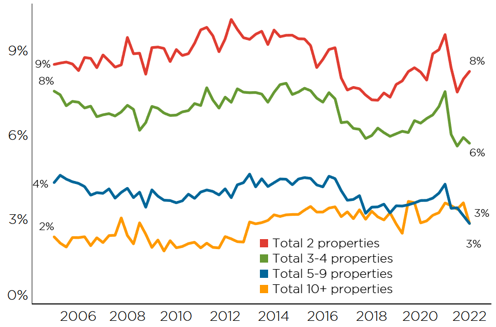 By contrast, switching to those with a greater equity base, we also note from the first chart that cash investors' market share has recently risen to 15%. Now, it's important to note that some buyers in this group may have made their latest purchase without a mortgage but could have freed up that cash by restructuring (raising) the debt on other properties in a portfolio. However, many will also have been genuine cash buyers, and in the current market where listings are rising, may be sniffing out some ‘bargains' in some areas.

Then finally, ‘movers' are another key group of interest, with these relocating owner-occupiers taking a 27% share of purchases in March and 29% for the first quarter as a whole.That quarterly figure is the highest since 2016, and has been helped by more listings being available (making it more likely that movers can actually find a property they like), but also by their longer period in the market and increased equity base.

At a regional level, these broad trends can be seen in many parts of NZ, although somewhere like Christchurch stands out a little (see the third chart). There, FHBs market share has dropped a bit lately, but it's still fairly high, and there hasn't been quite the same lift for movers or cash investors either. One factor for this is sure to be better affordability and hence more ability for debt-backed buyers to keep purchasing property, but perhaps also a good selection of ‘FHB stock', such as new townhouses and maybe older/cheaper houses too that have been left behind by previous FHBs who have now traded up (and maybe out to Selwyn for a new-build). 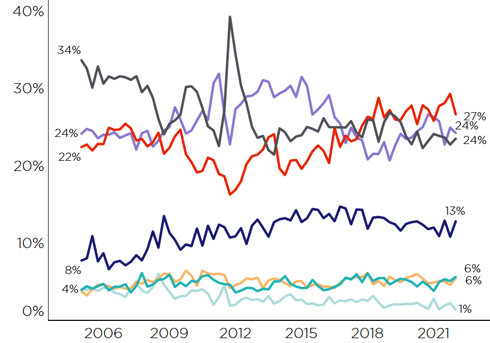 So what's the upshot? With LVRs likely to be in force at their current levels for the foreseeable future, mortgaged investors and FHBs may continue to find it tough going, although you could never rule out a loosening of the credit rules at some stage later this year, while we also have to acknowledge that some FHBs may have pulled back of their own free will, in the hope that they might be able to pay a lower price later.

That said, it still seems likely that buyers with a larger equity base may be the key groups to watch for the rest of the year, with cash investors hunting out some favourable deals and movers perhaps looking to take the opportunity to trade up to that larger ‘family home' in a softer market – of course, with everything having risen in value, this may still involve a larger mortgage too.