CoreLogic's House Price Index (HPI), which is the most robust measure of property value change in the market, shows the NZ property market has weakened further as the power shifts to buyers.

The national measure of housing prices fell -0.8% in April, the first decline since the weakness following the initial COVID-enforced lockdown in August 2020 (-0.2%). This time the downturn is also more widespread, including a -1.6% drop in Auckland and -1.5% drop in Wellington, including a more significant -3.0% fall in Lower Hutt.

Christchurch is the only main centre to show any real resistance from the weakening market, with values appearing to plateau rather than fall recently. 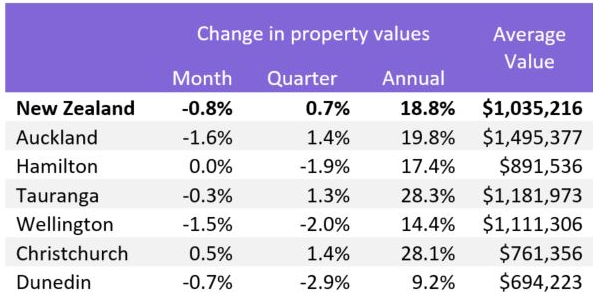 Nick Goodall, CoreLogic NZ Head of Research, says "Affordability remains a key constraint on the market as increasing interest rates impact the number of eligible borrowers and the amount they can borrow. This is on top of tighter credit availability by way of greater scrutiny on borrower expenses through the CCCFA changes as well as tighter loan-to-value ratio (LVR) restrictions continuing to bite.

"Proposed changes to the CCCFA may provide some respite, and the latest data from the Reserve Bank of NZ (RBNZ) shows banks are still staying well below (3% in March) their allowed speed limits (10%) on high LVR lending so credit flows may open up in the coming months. Debt to income restrictions have been pushed back too (more below).” 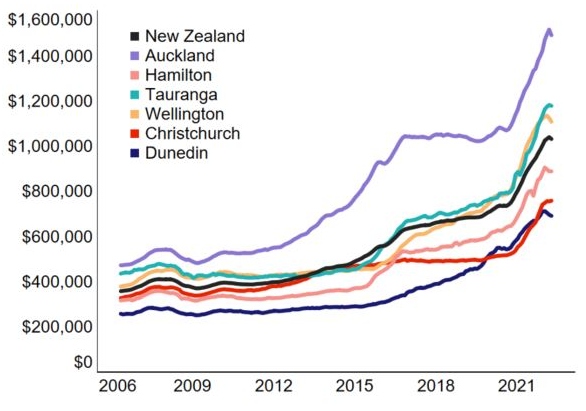 "Indeed, continued (albeit reduced) growth in Christchurch, combined with value falls in Dunedin, have seen the average value of the two South Island cities drift further from each other. This is a revealing change given Dunedin's average value was greater than Christchurch as recently as September 2021,” says Mr Godall.

The -2.9% fall in Dunedin values over the last three months is the greatest quarterly decline in over 13 years – back when the market was still in retreat from the Global Financial Crisis (GFC). Mr Goodall says house price affordability has become particularly stretched in the ‘Edinburgh of the South' with it being the third most unaffordable main centre, according to the value-to-income ratio, years to save a deposit and proportion of income required to service a mortgage measures.

Similarly, the -2.0% fall across the Wellington region in the last three months is also a record since the GFC. Both Lower and Upper Hutt are key contributors to the regional deterioration, with -3.0% and -2.6% drops over the month respectively.

However all five of the main Wellington localities saw declines in their average values over April and the last quarter. The slowdown has clearly hit hard across the Capital– perhaps reflecting the impact of tightening credit on first home buyers who typically account for a relatively high share of sales compared to other main centres.

Tauranga property values had previously defied the recent weakness but a fall of -0.3% in April may be the first signs of the momentum running out.

The size and diversity of Auckland has led to some mixed results across different measures recently, with a drop of -1.6% in April more than reversing the 1.4% growth recorded in March. At a more granular level, the old Auckland City Council area, which has the highest average value of the Super City at $1.72m, saw the largest fall in values, of -2.5% over the month. Both Waitakere (-1.9%) and Manukau (-1.5%) also experienced noticeable declines in April.

Meanwhile some growth persisted in Franklin (0.6%) and values in Rodney fell by a very minor -0.1%. 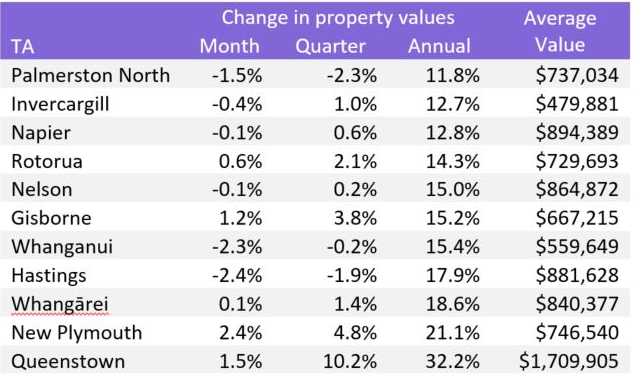 Mr Goodall says "Outside the main cities there appears to be particular weakness across the Manawatu/Wanganui and Hawke's Bay regions with the Hastings market falling -2.4%, Wanganui down -2.3% and Palmerston North decreasing by -1.5% in April.

"As is the case across the country the future of the labour market, both nationwide and locally, will be important in helping to determine ‘where to next' for each of the markets. Currently the labour market is tight, which likely means strong competition for people and should lead to higher wages. Consideration of the grass being greener across the ditch should also be recognised though, with a reduction in productivity not good for the prospects of our economy.”

Recent reporting of the importance and increased prevalence of the bank of mum and dad illustrates the growing inequality of society split by those who own property and those who don't. ‘Doing it on your own', says Mr Goodall, is becoming more and more difficult in this environment and this will ensure the housing market remains a hot topic for both the Government and parties in opposition.

"Accordingly, the RBNZ is never too far from those conversations either, and the Monetary Policy Committee's decision to increase the official cash rate (OCR) by 0.5 percentage points in April was bold, but also largely expected.

"This means the decision didn't have too much of an effect on fixed mortgage interest rates as the increase had effectively already been priced in, though anybody coming up to re-fixing their mortgage will be experiencing a large increase in their rates from the recent movement. The trajectory of the OCR forecast is what is of most interest however and the forecast peak of more than 3% is no doubt tempering some would-be-buyers to hold off in the environment of a falling market alongside rising interest rates.

"Outside of interest rates there appears to be a feeling that credit availability could be lifting out of the worst of times. High LVR lending has dropped well below the allowed speed limits and with pre-approvals back on the table and anecdotes of banks more comfortable to open up again, we may see a little lift of ‘otherwise locked out buyers', though this pool of buyers is likely to be relatively small.

"It was also interesting to see the RBNZ recently push any serious consideration for updated debt-to-income (DTI) polices into mid-2023 at the earliest (alongside mandated floors for test serviceability rates). The justification seemingly being that there's no need to make further changes in an already-adjusting market, going through variable and uncertain times. For now, investors will be relieved, as they are the ones borrowing at high DTIs the most often.”

Longer term, Mr Goodall says DTIs remain a likely addition to the RBNZ's toolkit, but perhaps their introduction will be met with a loosening of the LVR limits, to reduce possible political damage and impact to first home buyers – that impact could also be lessened by speed limits and exemptions too (e.g. for new-build properties)

"The slowdown/downturn appears to be entrenched, but will likely play out in a gradual manner, as long as the labour market remains tight. It should be noted that mortgage serviceability test rates have also increased with actual interest rates. While this likely contributed to the reduction in lending and transactions, it should serve to stress test that borrowers can withstand interest rate increases.

"Finally, a quick look at the construction/development industry and the recent announcement of further investment ($1.4Bn) into building houses and the infrastructure to support it in Auckland should be welcomed.

"Concern remains around the vulnerability of the development industry to withstand high material and wage costs, reducing property prices and increasing interest rates, however greater certainty on the pipeline of work should at least help with planning,” says Mr Goodall. Note:
The CoreLogic HPI uses a rolling three month collection of sales data. This has always been the case and ensures a large sample of sales data is used to measure value change over time. This does mean the measure can be less reactive to recent market movements but offers a smooth trend over time. However, due to having agent and non-agent sales included, the index provides the most comprehensive measure of property value change over the longer term.
Download the latest House Price Index data