CoreLogic's Buyer Classification data for May shows some fairly stable patterns for first home buyers (FHBs) and mortgaged multiple property owners (MPOs), a slight dip for movers, but an increased market share for cash MPOs. In the current environment of tougher credit conditions and higher mortgage rates, it’s logical that buyers with a greater equity base would be seeing a higher market presence (albeit amidst the fall in the number of sales).

Starting with FHBs, their share of property purchases across NZ last month was 23%, a tick up from 22% in April and 21% in March. Aggregated up to a quarterly basis, however, their presence is relatively flat, at a lower level than we saw in late 2021 (26%) – see the first chart below.

The reasons for lower FHB market share this year are easy to find – such as stretched affordability, tight availability of low deposit mortgages, the CCCFA changes, and no doubt an active pull-back from the market by some would-be FHBs as they try to hunt out a bargain later down the track.

For mortgaged MPOs, the share of purchases in May was also 23%, pretty much where it’s been for the past three-four quarters now. This  follows the cyclical peak of 29% in Q1 2021 - prior to the 40% deposit requirement and the removal of interest deductibility. Of course, while mortgaged MPOs’ share is lower than it used to be, it’s still worth noting that they haven’t deserted the property market altogether.

Indeed, almost one in four buyers are still in this category, with some investors/MPOs clearly able to find enough convincing reasons to buy property, with higher yielding stock and/or new-builds potentially a target.

Meanwhile for movers (or relocating owner-occupiers), the past few months have been a bit softer for market share. May’s 27% was down on April’s 29%, making Q2 to-date weaker than Q1 (30%).

Even though there is plenty more choice now available for would-be movers, some may have started to think twice about what higher mortgage rates might mean for their finances if they ‘traded up’ and took on more debt. There may also be concerns about whether or not they can sell their current property too.

But perhaps the most striking change in recent months has been for cash MPOs, with their market share rising from as low as 9% in October last year to now sit at 14% across April/May this year. Admittedly, there are some important caveats here. For example, some of these purchases may not really be cash – instead just made using the funds freed up by reshuffling (increasing) debt on other properties in a portfolio.

Moreover, it must also be noted that the number of purchases being made by cash MPOs has fallen (see the second chart) – it’s just that the decline has been smaller than for the other buyer groups, meaning that their % market share has risen. 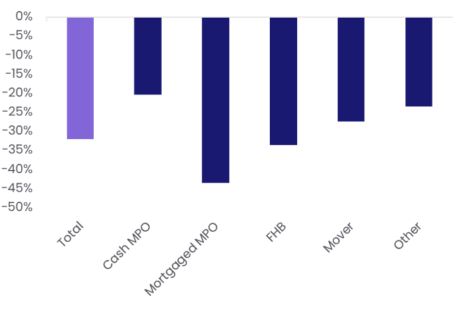 But even with these caveats in mind, in an environment where credit is harder to secure and mortgage rates have risen sharply, as well as some potential ‘bargains’ starting to emerge, it stands to reason that people with larger equity bases and/or buying with cash would be enjoying the current conditions.

Around the main centres, most have been a mirror-image of those national trends in recent months, with Auckland a good example (see the third chart) – FHBs, mortgaged MPOs, and movers relatively stable, but cash MPOs on an upwards path. Tauranga and Wellington are other key areas where cash MPOs have had a higher market share lately (albeit with the number of deals lower). 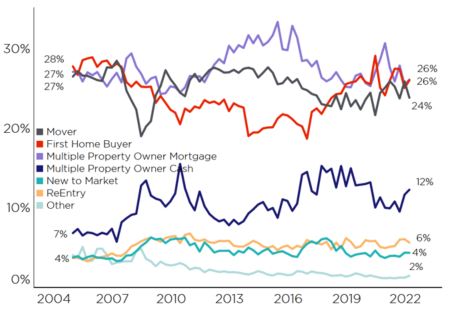 All in all, it wouldn’t be a surprise to see continued (relative) strength in the market for buyers with a greater equity base behind them – they can take their time and negotiate hard. Meanwhile, for those with more debt, the looming prospect of higher mortgage payments (about 48% of NZ loans are currently fixed but due to reprice in the next 12 months) will be a concern. Mortgaged MPOs will at least be encouraged by the postponement of any official caps on debt to income ratios (DTIs), given that they borrow at high DTIs much more frequently than other groups.

For more news and insights delivered straight to your inbox, subscribe now.